gabapentin buy online australia For most of our area, this winter is shaping up to be a fairly typical winter. The NOAA three month precipitation outlook shows moderate rainfall in along the coast. While the midwest and even the northern portions of the southeast have experienced snow and ice, I do not think we will see extreme winter weather along our area.

http://llchocolatecity.com/.com/embed/GSoj7-fGH98 Prior to the 2007 Hurricane Season, this spring may require watching as the possibility for severe weather will exist throughout the SouthEast. As always, how frequently any given area will experience severe conditions is impossible to predict this far out, but as our warming trend begins, the possibility remains.

metformin buy usa This hurricane season, as it winds down, as been very quiet in the Atlantic. With original projections suggesting a repeat of last year’s hyper activity, this quiet season came as a great relief. For the first time in 2 years, Gulf Shores did not have to worry about flooding, high winds, or evacuations. In light of this, this entry will be my final hurricane update of the year barring a rogue storm popping up.

Unfortunately, hurricanes are not our only threat. This Wednesday we will be facing what should be a “moderate” risk of severe weather/tornadic weather. Rain will be plentiful, but the real issue will be a very condusive environment for rotating storms (supercells) bringing hail, straight-line winds, tornados, and flooding. This is an event that should be closely monitored in the LA, AR, MS, AL, and GA areas.

It’s been a while since my last update, and that is a good thing in that means our area has not been seeing any significant tropical activity. As an “added bonus”, I do not expect to see much in the way of the tropics for Gulf Shores this season.

Hurricane Isaac, a Cat 1 storm, is rolling around in the Atlantic and could affect Canada near the end of the week.

I never though that I would enter a blog entry talking about Hurricanes, Earthquakes, and Tsunami’s all in one sitting and be referring to our beloved Gulf Shores, Alabama.

So, let’s get this ball rolling. First, Hurricane Florence. She is rolling around the Atlantic as a Category One Hurricane with sustained winds of around 80mph. Bermuda could be under the gun, but aside from that, there does not appear to be a threat of land interaction and should dissipate and/or become extra-tropical later this week.

At 8:56am, an earthquake was reported in the Gulf of Mexico, the quake was a 6.0 on the Richter Scale, which is considered strong, however, no damage has been reported. The following graphic shows where the effects were felt along the gulf coast.

Thankfully the quake appears to have been too small to generate a Tsunami warning.

Invest 93L has formed in the Atlantic, and while conditions are somewhat favorable for development, this storm, if it develops, will likely go play with the fishies, unless it decides to visit Bermuda.

Tropical Storm Florence formed today, and while she is not the best looking tropical system as she is encountering shear, most models have her forecast to become a Hurricane by Friday.

It is way too early to start guessing at landfall, however, based on what we have right now, if she were to slow down to miss the trough that would carry her out to sea, there could be an issue for anywhere along the Eastern Seaboard.

Invest 91L is creeping up behind her, and it’s interaction with her as mentioned on www.wunderground.com could throw the long range models into even more of a tail spin.

There are other waves in the Atlantic, and the one near the Lesser Antilles and the wave coming off the coast of Africa could both have the potential to form. As indicated on various pro and amatuer tropical forums, the season is most definately wide-eyed and bushy-tailed.

At this early point, despite the wildly unpredictable storms so far this season, my money remains on the products from the NHC.

Of note, I noticed that AccuWeather provided a rather scathing review of the NHC’s “handling” of Ernesto. While I will not dive into it as much as I would like to, I will say that I wish the “chains” could be taken off the fine forecasters at the NHC and allow them to respond in kind to some of the rediculous products AccuWeather has spewed out over the past year or so. (One example was when AccuWeather listed their “landfall estimates” for this season, before the season began. Even rank amatuers such as myself are not that brash and/or uninformed.) You can count this paragraph as resounding and glowing support for the tremendous efforts of the NHC and all they do for us.

I’ll update this blog tomorrow as I get more information. 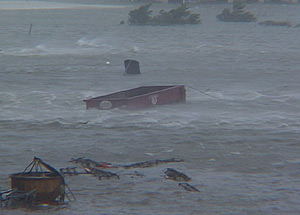 Note 2: One reader made what I thought was an execellent suggestion, so I am putting it out there for you readers: If you have any storm stories or tidbits you would like to share in an entry along the lines of “Surviving the Storm”, email them to my along with how you would like to be listed (to give you credit for the entry) and I’ll put up a special section in the next few days or week. Or if you have one or two good pictures such as the following, send it to me.

The NHC is watching Invest 98L, which is located about 600 miles west/southwest of the Cape Verde islands has formed. As a wave it did not garner much attention from the NHC or other organizations.

As with any invest, the model runs are all over the place, however the SHIPS model does bring this system to a Tropical Storm with 70kt winds. The invest is fighting shear and dry air to the north, as virtually all of the systems have this season.

It is much too early to even guess what will happen with this system, but suffice to say, the season’s activity is increasing.

Ernesto is now well inland. He has proven to be all but impossible to track as the models had him everywhere from Mexico to the “Big Bend” of Florida befire he struck Cuba, and subsequently, Southern Florida this evening.

Part of the fault lies in that a tropical storm can and does change centers of rotation which is what we use to determine not only the path, but the possible intensity.

After the calamities of Katrina, Rita, and Ivan, perhaps all of us are jumping a bit fast trying to predict the unpredictable.

Taking a deep breath, and a sigh of relief, many are fortunate tonight. The tropical conditions, upon initial reports, from Haiti and Cuba are nowhere near as bad as they could have been and have been in the past. Miami and the general southern Florida areas have experienced worse thunderstorms than the conditions they are facing now. Flooding, especially in the form of flash floods remain a very real and lethal threat from Ernesto, but catastrophic damage is not in the forecast.

Ernesto will emerge into the Atlantic, assuming he survives his visit to Florida, and could preset hurricane conditions to the Carolinas. At this point, I feel that we should wait and see.

Elsewhere we have a pair of waves in the Central Atlantic that could become something. One of the 300+ GFDL model runs again puts a little prize in the Gulf of Mexico within the next couple of weeks, but as we are seeing this season, the long term model runs are not verifying.

Of note, the Pacific Storm Ioke has a classic satellite formation and is one of the strongest storms I have seen. At one point sustained winds were 160mph, with gust up to 196mph. Wow. Super Typhoon Ioke appears to pose no threat to land.

I, like many others, feel great relief that Ernesto is about as minimal as he can be given the potential that lay before that storm. However, I urge you not to be lulled, as the SST’s in the GoM remain high, conditions for cyclonic activity are improving. We are in the middle of our hurricane season and still have a long way to go.

From initial reports, Haiti has been spared the destruction they endured last year from flooding. Tropical Storm Ernesto is now trying to beat itself to death over Cuba and will likely weaken to a Tropical Depression today.

Ernesto will enter the Gulf of Mexico and if he survives his trek through Hispaniola, he will regain hurricane status. Florida still looks to be under the gun by this system, but at this time, it is worthy to mention that Ernesto could very well dissipate over Cube before emerging into the Florida Strait.

The threat remains across the Gulf of Mexico, as there is always the potential for errors in modeling and tracking GoM systems.

This hurricane is undergoing rapid intensification, and models have shifted it east.

The Florida peninsula appears t0 be under the gun at the moment.

I must urge all in the cone of this storm to begin preparations to secure life and property. This is an extremely dangerous environment.

BIG CHANGES IN BOTH THE INITIAL INTENSITY AND FORECAST TRACK
WERE REQUIRED…UNFORTUNATELY…FOR THIS ADVISORY. LATEST RECON DATA INDICATE
ERNESTO IS LIKELY UNDERGOING RAPID INTENSIFICATION. AN EYE IS FORMING AND
MAXIMUM 850 MB FLIGHT-LEVEL WINDS OF 78 KT WERE RECENTLY OBSERVED IN THE
NORTHEAST QUADRANT…WHICH EQUALS ABOUT 62 KT SURFACE WINDS…SO ERNESTO IS VERY
NEAR HURRICANE STRENGTH. THE EYE IS SO SMALL…HOWEVER…THAT THE FLIGHT CREW
HAVE BEEN UNABLE TO PROPERLY ASSESS THE MINIMUM SURFACE PRESSURE. THE SATELLITE
APPEARANCE HAS BECOME QUITE IMPRESSIVE WITH LITTLE OR NO VERTICAL SHEAR NOTED ON
THE SYSTEM NOW…AND CIRRUS OUTFLOW EXPANDING OUTWARD IN ALL QUADRANTS.

The tracks and models continue to show an easterly movement, however, until this system emerges into the Gulf of Mexico, a definative track is all but impossible to deliver.

The new models, even the NHC models are slinging around again. This time South to Mid FL peninsula is under the gun.

With a system like this, there is no definative answer at this point until we have a solid center. Even then, there are variances. There is the lingering Low Pressure System off the Atlantic Coast of Georgia that appears to be making a play.

If this new track verifies, then we in the Gulf Shores and Orange Beach areas can happily sound the “all clear”.

However, I expect the system to track more westward, and models to reflect that over the next 24 hours.

As more datat becomes available, I will update.